Authored by the Attorney General’s Task Force, below are cutting–edge resources for victims.

In addition to the appendix provided by the Technology and Leadership Subcommittee, we’ve compiled a list of links for other popular sites. As a wide range of technology companies exist (e.g. search engines, social media, forums), victims will encounter an array of policies and procedures while removing images. Some websites request identification validation from the individual initiating the removal request. One way identification verification can be achieved, for example, is by filing a report with law enforcement. For guidance and additional information, see the Victim FAQ and/or Law Enforcement FAQ.

Authored by the Technology and Leadership subcommittee, this document outlines how existing and emerging companies can combat cyber exploitation through internal policy.

Role of the California Department of Justice

Definition: Cyber Exploitation is the non-consensual distribution or publication of intimate photos or videos online.

Cyber exploitation is a serious crime that often results in significant harm to a victim’s personal and professional life and physical safety. While cyber exploitation affects both men and women, a study by the Cyber Civil Rights Initiative found that 90 percent of victims are women. The same study found that 93 percent of all victims suffered significant emotional distress, 51 percent had suicidal thoughts, and 49 percent reported they had been stalked or harassed online by users who saw their material.

Cyber exploitation – like domestic violence, rape, and sexual harassment – disproportionately harms women and girls. In response to this 21st century form of violence against women, the Attorney General and the California Department of Justice are committed to holding perpetrators of these crimes accountable. Under her leadership, the California Department of Justice is leading the fight against Cyber Exploitation.

Role of the California Department of Justice 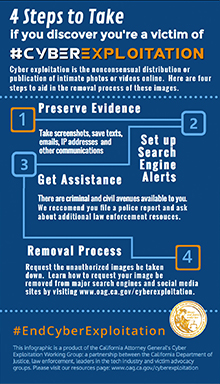