In the 1950s, the world produced approximately 1.5 million tons of plastic annually. Today, that number has skyrocketed to more than 300 million tons – a nearly 20,000% rise – with no end in sight unless we collectively take action.

For decades, the fossil fuel and petrochemical industries have promoted the myth that we can recycle our way out of the plastics pollution problem. In California and across the globe, we are seeing the catastrophic results of this historic and ongoing campaign of public deception. Plastic pollution is seeping into our waterways, poisoning our environment, and blighting our landscapes.

On April 28, 2022, Attorney General Bonta announced a first-of-its-kind investigation into the fossil fuel and petrochemical industries for their role in causing and exacerbating the global plastics pollution crisis.

In the 1980s, in the wake of images of landfills overflowing with plastic waste and widespread plastics litter, state legislatures and local governments began considering bills restricting or banning plastic products. In response, the plastics industry, comprised of major fossil fuel and petrochemical companies, began an aggressive – and deceptive – marketing and advertising campaign to convince the public that we could recycle our way out of the plastic waste problem.

The Council for Solid Waste Solutions, a special project formed by the Society of Plastics Industry, which was comprised of all the major petrochemical companies including Exxon, Mobil, Dow, DuPont, Chevron, and Phillips 66, spent millions of dollars to combat the plastics “image” problem, placing ads in major magazines like Time touting the benefits of recycling and portraying plastics as the solution, not the problem.

The Society of the Plastics Industry also adapted the chasing arrows symbol, widely used by the environmental community, to add numerals in its center, assigning various polymers grades 1 through 7. The symbol was successfully promoted to state governments as a “coding system” to be adopted in lieu of restrictions like plastic bans, deposit laws, and mandatory recycling standards, even if there was no way to economically recycle the products.

This has led to the current misunderstanding by a majority of Americans that any plastic bearing the symbol can be recycled. The California Legislature has recently responded to one form of deception by adopting legislation, Senate Bill 343, outlawing the use of the chasing arrows symbol to represent that a product is not environmentally harmful without substantial documentation supporting the claim.

Executives at major fossil fuel companies have long known the truth. In 2020, reporting by NPR revealed internal documents as early as the 1970s showing that executives were warned that recycling was “infeasible” and that there was “serious doubt” that plastic recycling “can ever be made viable on an economic basis.”

In reality, despite the industry’s decades’ long recycling campaign, the vast majority of plastic products, by design, cannot be recycled and the U.S. plastic recycling rate has never broken 9%. Today, the U.S. recycling rate has slipped even lower, with a current rate of less than 6% according to a recent report the Last Beach Cleanup. The remaining 94% is landfilled, incinerated, or otherwise released into the environment.

As fossil fuels continue to be replaced by clean energy sources, fossil fuel and petrochemical companies invested an additional $208 billion to expand plastic production worldwide, which will only exacerbate the growing pollution problem.

The rapidly increasing production of single-use plastic products has long overwhelmed the world’s ability to manage the resulting waste. Every year, tens of millions of tons of plastic enter the ocean. Plastic pollution in our oceans is expected to triple by 2040, and without significant action, there could be more plastic than fish in the ocean by 2050. 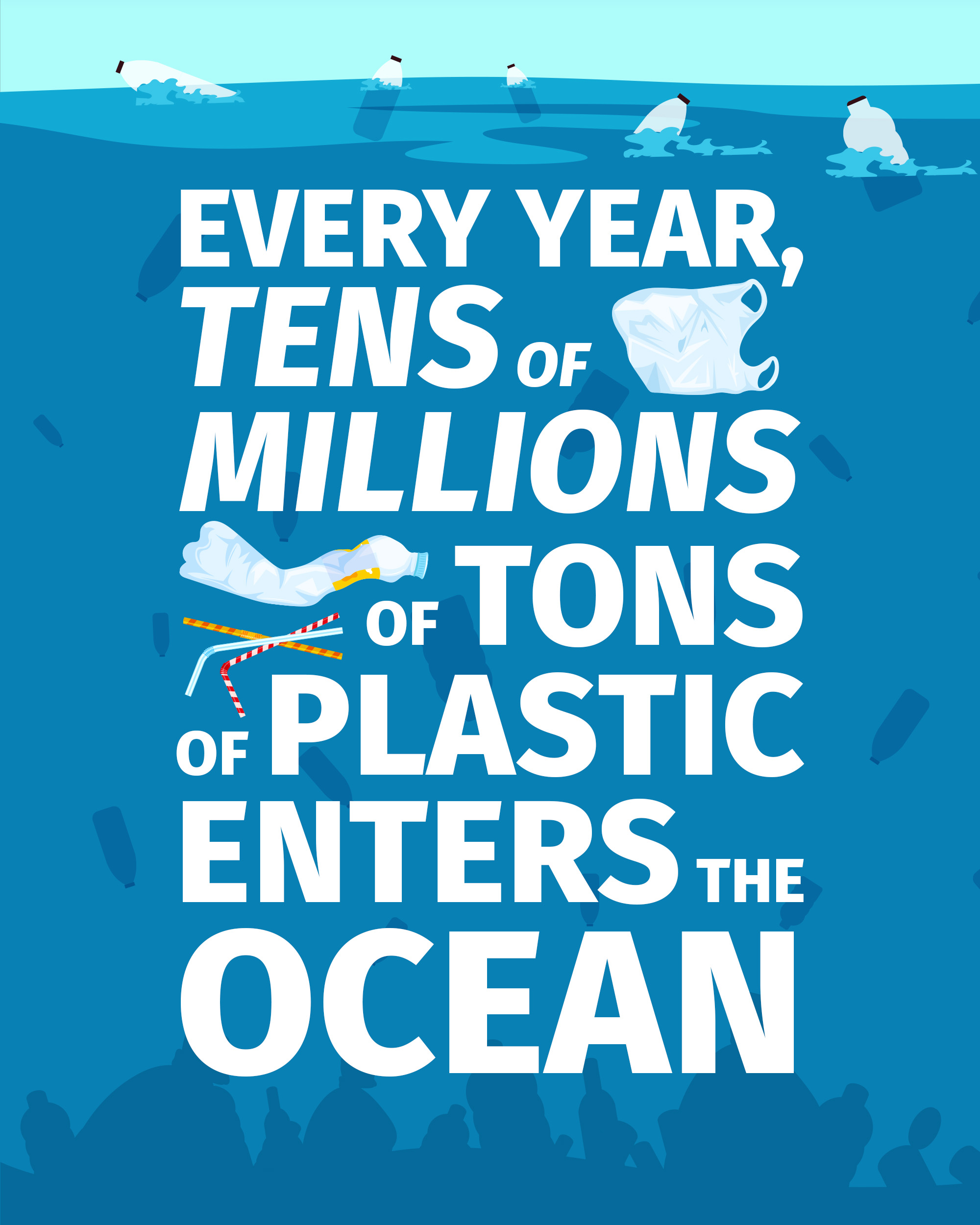 Plastic pollution is pervasive in California, polluting the state’s rivers, beaches, bays, and ocean waters, including national marine sanctuaries and state marine protected areas, and costing the state an estimated half a billion dollars each year in clean up and prevention. Plastic waste also harms California wildlife. Plastic-related wildlife fatalities were documented as early as the 1970s.

Plastic pollution may also be harming our health. Plastic does not fully degrade, instead breaking down into smaller pieces called microplastics. Microplastics have been found in our drinking water, our food, and even the air we breathe. Just this year, two studies found microplastics in human blood and living lung tissues for the first time. Over the course of their lifetime, the average person will unknowingly consume more than 40 pounds of plastic.

Plastic manufacturing itself is highly hazardous, with the pollution burden being primarily borne by low-income communities and communities of color. Plastics manufacturing plants and materials recovery facilities, which are often sited in or near marginalized communities, generate hundreds of millions of tons of toxic air pollution each year. Ninety-nine percent of plastic is made from fossil fuels. The process of making plastic — from the extraction of oil and gas through the stages of manufacturing polymers — is a highly polluting process and a significant source of greenhouse gas emissions. The plastic industry’s greenhouse gas emissions are expected to surpass those of coal-fired power in the United States by 2030. While California has aggressive programs in place to reduce greenhouse gas emissions and transition to a clean economy, plastic production remains on the rise, threatening state climate goals and exacerbating the impacts of the climate crisis.

The Attorney General’s investigation will focus on the fossil fuel and petrochemical industries' role in misleading the public about plastics recycling and the ongoing harm caused to the state, our residents, and our natural resources. Specifically, the investigation will:

As part of the investigation, on April 28, 2022, Attorney General Bonta issued a subpoena to ExxonMobil seeking information relating to the company's role in deceiving the public.

ExxonMobil is one of the largest polymer producers in world – its polymers account for more single-use plastic waste than any other company – and was an active participant in the Council for Solid Waste Solutions, which spent millions of dollars in the 1980s to convince the public we could recycle our way out of the plastics problem.

The fossil fuel and petrochemical industries may be causing the global plastics pollution crisis, but it’s going to take all of us to solve it, and recycling plastic products that are designed to be recycled is a crucial element of the solution.

By better understanding the global plastics pollution crisis, consumers can make informed choices as they go about their daily lives – and that includes reducing consumption of plastic, especially non-recyclable and single-use plastic products, reusing plastic, and recycling plastic products that are designed to be recyclable.

Below are some links to some resources to learn more: